Billy Rohan moved to NYC from Gainsville, FL to persue his dreams. Despite experiencing a few bumps in the road, Mr. Rohan endured to become one of the most infamous skaters in New York. With no intentions of changing anything anytime soon, be on the look out for more hijinks from Billy in the future. – Alex Hansen

Alex: This interview is coming fresh after a viewing of the new Fully Flared video. What did you think?

Billy: Wow, that’s a hard one to describe. It was like if you took the best NBA All Stars of all time and put them all together in one star-studded game. That is what the Lakai video was like.

Alex: You moved to London when you were younger and skated with guys like Nick Jensen right?

Billy: Yeah, when I was 18 I moved to London with this girl I met in Europe. First we lived in Switzerland for a year, then we moved to London for a year and a half. London is similar to the East Coast. The weather is real fucked up. It will rain all winter, not like NYC rain, like everyday all day rain—but no snow though. When it’s a nice day in London, it’s a great place to skate. The kids who skate there are rad cause they don’t worry about sponsorship or money. They are just hyped to skate with their friends. At the time I was skating a lot with Chris Palman, Toby Shaw, Oliver Barton, and Nick Jensen. When I met Nick he was real small and scrawny, in Fully Flared he looked like the British Rick Howard, all grown up.

Alex: What do you do in winter when its too cold to skate in New York?

Billy: Right now, we do this thing called 20 dollar Tuesdays. It’s where everybody coughs up 20 bucks, we rent a 15-passenger van, meet up at Supreme around closing time, then we drive out to Drop In skatepark about 30 minutes away from Manhattan and cruise. We want everybody to come out. I just do that or go home to Florida to skate.

Alex: I recently found out that you are allergic to alcohol.

Billy: It runs in my family. When I drink it makes it hard for me to go to sleep. So I would drink and just bug out. I did not know what was wrong with me. Sometimes I would get wasted and couldn’t go to sleep for six days. I thought medication was the best treatment but when you take pills you get can get crazy, you know. Finally I went to the doctor and he basically explained to me some people have an allergic reaction. So now I know I just can’t drink. Some people can do it. I would if I could.

Alex: How’d you got involved with Greg Chapman?

Billy: This girl that I was really feeling hooked me up through her mom who was a Woodward Gymnastics coach. She got me into Woodward for free with no credentials. I was not a visiting pro and I was not a camper. It was great. I met Brett Peterson at Woodward and he introduced me to Chapman. I had known that he was doing Zoo boards and so I was hyped to be involved. They told me about starting Chapman skateboards. So I hopped on board. The packages were dope, lots of Zoo decks.

Alex: I remember seeing everybody riding the Chapman Tiger logo. That became a major symbol for the company.

Billy: Yeah, that was this t-shirt logo I was really into. I bought this shirt at some 99-cent Chinese spot and it was one of my favorite shirts. So I brought it to the company and they did an artist’s rendition for the logo and the rest is history. The tiger is positioned in this ancient fighting style called Shotokan. It was great to see it turn out popular. 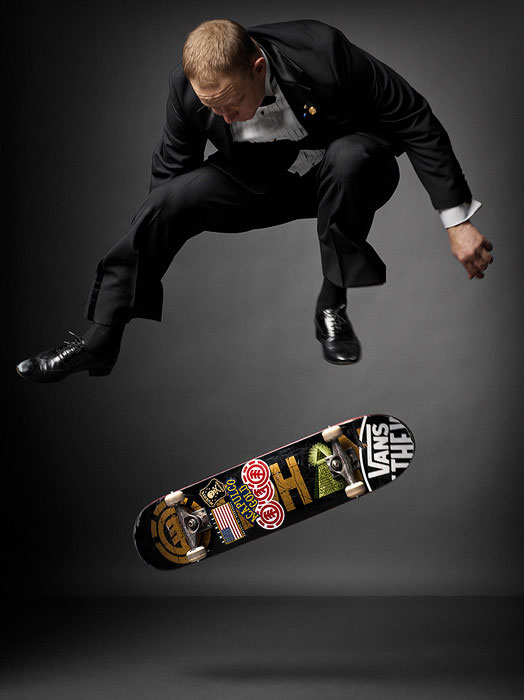 Alex: A few years back you did a blindfolded hardflip. And this year it was a King of the Road challenge. What’s the story behind that?

Billy: It was after the Tampa Am contest one year. During best trick me and a friend went into the back parking lot. We were just bullshitting, smoking weed, and getting drunk. I had this blindfold that I would use to go to sleep on the long ride from Gainesville to Tampa. I got masked up and tried it three times just joking around. I ended up sticking one and it sucked cause I got shin injury on the side of the quarter pipe afterwards. I thought it was pretty funny that this year Thrasher made the Rohan Challenge. I always wanted to get one of those KOTR guest spots hint hint (laughs). It looks so fun to be on one of those.

Alex: There was this dope ad campaign where they had this huge metal Zoo York sign in the background of the ads. Yours was a frontside flip. How did that go down?

Billy: Whoever organized it had this ten foot 500 pound metal Zoo York sign. We had a 15-passanger van with no seats from the company. So we just drove around looking for spots to shoot an ad on. Someone was like, “Let’s just hit this thing.” It was in the middle of Times Square and we had to go at five in the morning for the photo. It sucked cause you couldn’t even tell that it was Times Square in the background. But whatevs, I got a Zoo ad out of it.

Alex: Weren’t you selling juice all over the city for a while?

Billy: That was a good job. The name of the company was Sambazon. I was the regional NY sales rep. Basically it contained this fruit called Acai. I had tried it in Brazil but being that it was so expensive to export, I thought that the company would not bring it here. I would sell the juice at judo competitions and sports events—just getting free juice and a little money on the side. I worked for them for 2 years. It’s probably the best juice for skateboarding. It’s healthy and you don’t feel heavy after drinking it.

Billy: I’m working with Acapulco Gold and Instant Winner. The companies are based on hard work from ex-Supreme buddies. It’s two brands that came together to form a tight-knit click. We took a trip to Ohio last summer for a tour and Japan and Europe trips are in the works.

Billy: Thanks to everybody in skating who stuck with me in hard times and I hope to have some fun sessions this summer at Tompkins and hopefully build some new obstacles.