Every time we interview an influential skater from the ’90’s Embarcadero scene, James Kelch’s name comes up. What’s amazing about James is that his personality and charisma had just as big of an impact as his skating. In his own way, he defined a generation. The opportunity to sit down with Kelch and get him to tell his story was a highly entertaining and treasured experience to say the least.

48 Blocks: How did you first get into skateboarding originally?
James: The first time I saw a skateboard was on Treasure Island around 1985. Some kid just happened to have one and he did a boneless off a car and there was a few girls standing around, I was like “ooooohhhhh, I see how the game works.”

48 Blocks: So back when you first started, where were you skating and who were you skating with?
James: When I first started skating it was on Treasure Island, the island connected to the Bay Bridge, with just a couple little kids from around the island.
48 Blocks: How did you end up coming to the city and going to Embarcadero for the first time?
James: I had to go to Portrero Hill middle school and took the bus with the some kids. We ended up going to the T.L. then going downtown, that’s when I seen Embarcadero and that there were skateboarders down there. So I started going down there everyday around 1986.
48 Blocks: Who was skating Embarco back then?
James: There was the Daly City posse, Brian Ferdinand, people like that…Vince Rodriguez, weird cats that ended up disappearing.
48 Blocks: When did you first get sponsored, how’d that happen?
James: I was just skating Embarcadero and Fausto Vitello ended up coming down with some dudes that were doing a demo. At first I thought he was a weird old gay guy staring at me for way too long, I didn’t understand what the hell was going on. I asked Greg Carroll, “who’s this dude?” Cause I seen him talking to him, he was like “oh blood, that’s the dude that owns all this shit… that’s the big man, be cool.” So I was like “word” and kept grinding my trucks all day and at the end of the day he asked me if I’d like to skate for Indy and Spitfire. 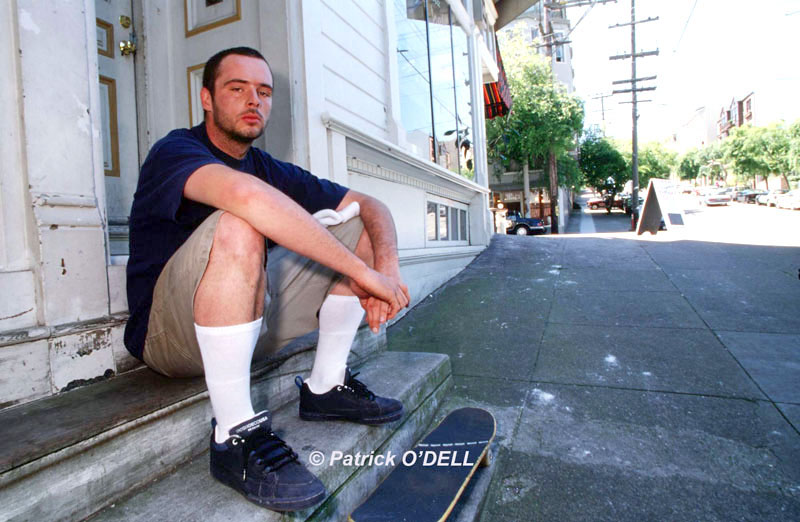 James: Hahahaha… The Real video straight up, that’s what it was called. It was rough, I didn’t even really skate; I was like a drug addict. (laughs) Straight up… they would have to come to my house and drag me out, Jim would make me get in the shower, call me all times of the day. They made me skate. Basically, some of those tricks they asked me to do… I didn’t even do those tricks. (laughs) They just wanted me to do them and I did them cause I didn’t even really skate at the time.
48 Blocks: What was the timeline from Real to FIT?
James: At the very end of ’94 I got off of Real. I was living in Ohio, I lived in San Diego for awhile then I went to Ohio. I lived in this weird place in Cincinnati with thieves and shit. UPS would just throw your boards on the porch and I would come out and there were no boards. I kept calling them and they thought I was selling them and it was a big argument. Finally I told them “I don’t really care about skating, I’m done.”
48 Blocks: So how did the whole FIT thing come together?
James: That was this guy Rodger Davis – idiot. He had some shit company, Experience and all that other crap and he hooked up with a guy named Dave Kang and those two started FIT.

48 Blocks: So what did you do after FIT was done?
James: I was working at a furniture store and smoking chronic and playing Madden. The store was right on the block too, so I would just go home, blaze, then go back to work and chill with my little Irish friend.
48 Blocks: Right now you’re living in Cincinnati, what’s poppin’ out there?
James: Racism. (laughs) Racism and bammer weed. There’s some good skaters out there, Al Davis… I’m gonna give him shout out right quick.

48 Blocks: Most people have heard by now, but talk about this EMB documentary… what’s the real deal?
James: They’re just trying to get a basic true story about the situation, interview all the people and get their views on the scene and other people’s views on the scene. Kinda like a little history I guess.
48 Blocks: I heard it’s kind of based around you too though, your story.
James: I don’t know, they’re not telling me these things but I’m noticing as it’s poppin’ off. (laughs) I’m just kinda going with the flow.
48 Blocks: I know you guys are just filming it right now, but is there any time that you’re shooting for to get it out?

James: A realistic goal, we talked to some people that do some shit down in LA and it takes some time to do these things. For someone like them, a year and a half to two years.
48 Blocks: Is there a website or a place where people can check for updates?
James: Well, on Myspace there’s an EMB Documentary page. They’re making something though, Most Blunted Productions is a website that they’re working on right now… that’s gonna have the information and little things like that.
48 Blocks: That sounds tight. Any last words or thing you wanna say?
James: Awww man, angels rule the world.