Karl Watson has been a staple in the SF skate scene for many years. He’s grown up in the public eye and is now juggling a family, company, and designing for his other sponsors along with his duties on the board. Through it all, Karl remains mellow and kind to everyone. 48 Blocks chilled with Karl recently and discussed his history, current projects, and future plans – check it out below.

48 Blocks: What’s been going on with you for the past couple of years? You recently had another kid…
Karl: For the past couple of years, I’ve been skating hard, hanging out with the family, raising the kids, having more kids… now I have three sons. It’s a lot of hard work, but you’ve gotta dedicate your time to your children, cause they’re the future. For the most part I’ve been trying to get inspired by history, certain influential figures, just really learning more about my history.
48 Blocks: Being that you’re busy with the family and living up here, how hands on are you with Organika right now?
Karl: The graphics are handled by Brian Baker, I handle everything that has to do with the team.
48 Blocks: So you’re also the team manager?
Karl: Yeah, team manager and co-owner.

48 Blocks: You recently put Zach Lyons on, was that based off his Get Familiar part? How’d that come together?
Karl: I met Zach on tour, we were touring for the video It’s Official – the premier tour. I saw Zach in DC and I always liked his skating and right when I saw him I was like, “aw man, Zach Lyons.” I introduced myself, and he was tripping on me cause I was tripping on him… he was kind of taken aback. I got his information and started sending him boxes and we just went from there. Then Get Familiar came out and I was very impressed.
48 Blocks: Where have you been skating at lately?
Karl: East Bay baby! EAST BAY! (laughs)
48 Blocks: More parks or street spots?
Karl: Street spots all day.
48 Blocks: What’s up with the footage, when can we see a new Karl Watson part?
Karl: The LRG video, check it out… it’s dropping any day now.
48 Blocks: That’s right, when is the LRG video coming out?
Karl: It should have been out last month. (laughs)
48 Blocks: Are you gonna have a full part?
Karl: You’ll see how it is… it’s not done in parts, it’s a montage style video.
48 Blocks: Speaking of LRG, you’re probably the first person that I can remember that was on the skate team. How did you hook up with them?
Karl: In late ’99 my friend Chad showed me LRG and I was feeling their designs. He told me that they wanted to sponsor me, from there I tried their stuff out. I got a lot of negative feedback from other people saying, “they’re not gonna do good, you should go for somebody else.” I didn’t listen to anybody, I followed my heart and I liked their designs… that’s the first thing that drew me to them, then Jonas and Robert are just the coolest dudes – so we’ve had a long-standing relationship in the skate world. 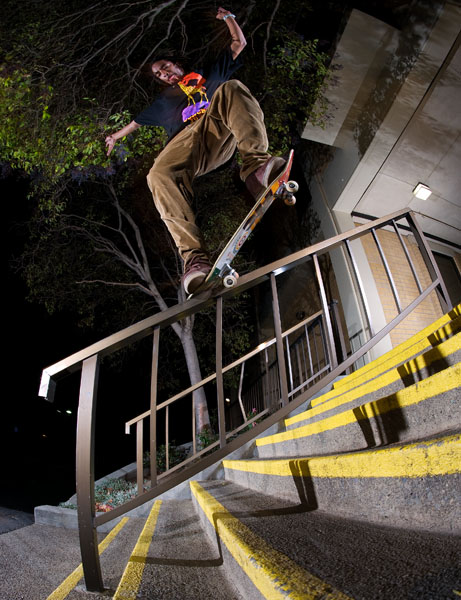 48 Blocks: Did you have any impact on shaping the skate team?
Karl: Yes.
48 Blocks: Did you pick the riders, who are some people that you specifically wanted – obviously Adelmo.
Karl: Everybody, I wanted everybody on…. but Vince, Vince Domingo also had a integral part in building the team.
48 Blocks: Are you involved with any of the clothing designs at LRG?
Karl: Yes I am. I’m coming out with a Karl Watson signature jean in October of ’07. We just finished designing it.
48 Blocks: Cool. Let’s back up and talk about some of the early days. How did you first get involved with skating?
Karl: Me and my Mom lived in a kind of bad area, the Lower Haight / Fillmore. I was hanging out with some bad guys that weren’t a good influence at all. They started getting arrested and my mom saw who I was hanging out with… I never got arrested, but my Mom moved away from that neighborhood. I used my skateboard to skate back there. So yeah, in between one day I saw Nick Lockman. He was chillin’ in his window and was like, “hey, do you wanna come in?” and I was like “ok.” Nick Lockman is the one that really got me into skating.
48 Blocks: Way back you had a part in a Dogtown video, I think that was your first video part…
Karl: Yep.
48 Blocks: How’d you hook up with them?
Karl: Aw man, Nick Lockman and Sam Smyth – they really helped me out. If it wasn’t for them, I wouldn’t be where I’m at today. It’s all about who you know and I knew the right people at the time.

48 Blocks: What happened to Mad Circle, it just disappeared when it was one of the hottest companies at the time?
Karl: Well, It was distributed through Giant and over the course of five years they stole 100,000 dollars from Mad Circle. So, Justin Girard’s mother was a lawyer at the time and she looked into all the records. They started suing Giant. Giant pulled the plug and Justin was just over it. He had a lot of court issues that he had to deal with. He’s still in the skate game, but unfortunately Mad Circle had to end.
48 Blocks: Do you know if Justin ever got his money back?
Karl: I’m pretty sure he did.
48 Blocks: What made you decide to start Organika, where’d you get the name from, what influences your vision of the company?

Karl: To be honest, I didn’t wanna start a company that portrayed too much of a peaceful image. That’s how I am and I didn’t wanna push that onto people. I had a different name, it was called Altered. Then Troy Morgan recommended Organika, I thought it was too soft at first; I didn’t think it was gonna do good. We ended up using it, but I just wanted to make a skateboard company not a hippie style company or too conscious of a company; but I definitely want to bring consciousness to skateboarding.
48 Blocks: Are you looking at any more new riders?
Karl: Not really, I would like to have Matt Field on the team.
48 Blocks: Let’s talk about I-Path, how’d that happen?
Karl: In 2001 or I think 2000, I was sponsorless – no board sponsor; Mad Circle died then we tried to start this company called CMO, that died. Matt Field just believed in me, he hooked me up, started paying me, then I got hooked up on Expedition and it just grew from there.
48 Blocks: You have a very distinct style, what influences you?
Karl: I don’t know, just clean style. I like all of the younger people, I like to watch them, watch how they skate, and watch how they dress. It’s really influencing to see how far we’ve taken fashion, not like I’m gonna follow the trend, but I appreciate it.
48 Blocks: I know your son is skating a little bit, is he getting into it?
Karl: He’s getting good. He’s about to sign his first contract with Pony shoes.
48 Blocks: Oh really? So he’s got kickflips and heelflips and stuff?
Karl: No, he’s a little kid, but they wanna hook him up.
48 Blocks: Any favorite memories or time period?
Karl: All I gotta say is EMB, best times of my life.
48 Blocks: So you first went down there with Nick, Sam, and those dudes?
Karl: Yep, I think Sam brought me down there first.
48 Blocks: What was your first thought when you first went down there and saw it? 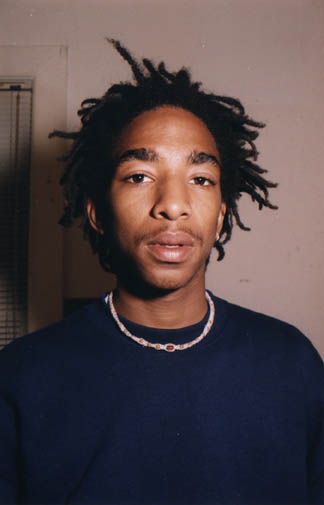 Karl: My first thought was like, “wow! It’s so big, and all these skaters, and it’s like it’s own little world.” The first time I went there, I tried to do an ollie grab off the big stage and I got broke off. I almost got knocked out. I was just laying there, a scrawny little kid and James Kelch came over and picked me up and brought me over to the wave. He sat me down and was like, “it’ll be alright little buddy, don’t trip.” Ever since then I had nothing but respect for him.
48 Blocks: Did you ever get vibed at EMB?
Karl: Not personally, but I saw that attitude being perpetuated on others who were outsiders.
48 Blocks: So was it the way you handled yourself or what?
Karl: I got lucky, I think it was the people that I knew cause they did not let anybody into the crew. I was just a jokester and a wild little kid, so they appreciated that.
48 Blocks: Who are your skate influences?
Karl: Tommy Guerrero, Jim Thiebaud, Ray Barbee, Marc Johnson, Mike Carroll, Chico Brenes…let’s se who else? All the new young bucks man, Nyjah Huston, that’s my boy right there! Eli Reed, too many people right now. Skateboarding’s gone so far, I love it.
48 Blocks: What kind of music do you listen to?

Karl: Everything, right now I’m listening to Elan… it’s this reggae artist from Jamaica with the same name as my son. He’s off the hook, but I like it all. I like Built To Spill, Radiohead, I got that new Madonna album, “Confessions On A Dance Floor.” She has some tight songs on there.
48 Blocks: What’s next?
Karl: My future plans are to better myself and become the person that I’ve always wanted to be.
48 Blocks: Last words?
Karl: Keep your head up out there, we’re in a melting pot that’s not melting quite right. Do your best to be positive and help the melting happen.