The first time I saw Kelly Hart skate was in the Gold Wheel’s Got Gold bonus footage. At the time, Kelly was a completely unknown am from SoCal. I was impressed with his part when I watched it that day and have been paying attention to Kelly’s skating ever since. With that said, I was super stoked when I heard Kelly wanted to do an interview for 48 Blocks. He’s definitely one of the people to be on the look out for in 2008 and beyond.

48 Blocks: Let’s start with the basics, where are you from and how did you first get started skating?

Kelly: I’m from Laguna Hills, California and I’ve been pretty much living here my whole life. I’ve lived in the same house forever. When I was a kid, I had a bunch of kids that were my age on my street. I remember one day I was playing basketball in my driveway and I looked up and saw my friends cruising down the street on their skateboards. Ever since that day, I was completely hooked on skating.

48 Blocks: What were your early influences?

Kelly: When I first really got into doing tricks, it was right when Trilogy came out. That video got me really hyped on skating. I was completely amazed on what everyone in that video was doing on their boards. A few months later Mouse came out. That video just blew me away. I couldn’t even comprehend the tricks that they were doing. When I was in high school, the skaters I was really psyched on were people like Brian Wenning, Robbie Mckinley, AVE, Josh Kalis, Gino Iannucci, and Biebel for sure. Pj Ladd and Ryan Gallant too, those two are amazing when it comes to skating.

48 Blocks: Who’d you grow up skating with and what spots were you hitting up?

Kelly: I grew up skating with a bunch of kids from around here. I usually just skated in my driveway. It’s pretty wide open and flat. I had a box and a flat bar set up. I also had a little flat gap that was between my neighbor’s driveway and mine. That was pretty fun to skate everyday. When I would go out skating street spots, we usually went to Trabuco Hills high school or Laguna Hills high (both of them R.I.P). They had perfect ledges and blocks to skate. But now, just like all the other schools around here, they’re knobbed.

48 Blocks: How did you first hook up with Expedition? Were they your first sponsor?

Kelly: I had known Eli at Gold Wheels for a while and had randomly talked to him. He said that I should send a sponsor-me tape in to Expedition. So I did. Crazy enough, Troy called me back. I used to ride for a company called Sugar Sports before Expedition.

48 Blocks: You skated to Common in It’s Official, that was an interesting choice. Most people don’t skate to underground hip hop these days. What music gets you psyched to skate?

Kelly: Man, truthfully I’m down for all types of music. Lately I’ve been all hyped on Nirvana—which is pretty random. I really like oldies a lot too—stuff like Curtis Mayfield and Stevie Wonder. I do remember the first time I listened to the Common album called Be. I heard the first track and was so hyped on it. I listened to it all day when I skated out in Barcelona. Coincidently, they ended up using it for my part in the video.

48 Blocks: Speaking of It’s Official, talk about filming for that. Where did you go to film your part, and how long did it take you to put that together?

Kelly: Whats pretty weird about It’s Official is that I broke my foot incredibly bad about six or seven months before the video even came out. I was filming before I got hurt, but I truthfully didn’t know that all that footage was going to It’s Official. We really didn’t even have a plan for the video until about a month after I got hurt. I did go on a couple trips with Kayo. We went to Barcelona twice—which was completely amazing. Everyone on Kayo is so sick to chill with. I think the second time I went to Spain was pretty intense. We had an amazing crew, but we stayed at a super janky place kind of far away from the middle of the city. I remember coming to the apartment and there being some random ass dude just living in the closet. He was some crazy Moroccan dude. He would dress all nuts—wearing like super Guido stuff. Seriously, somehow this dude ended up bringing chicks back to the house and hooking up with them in his little closet room all the time. 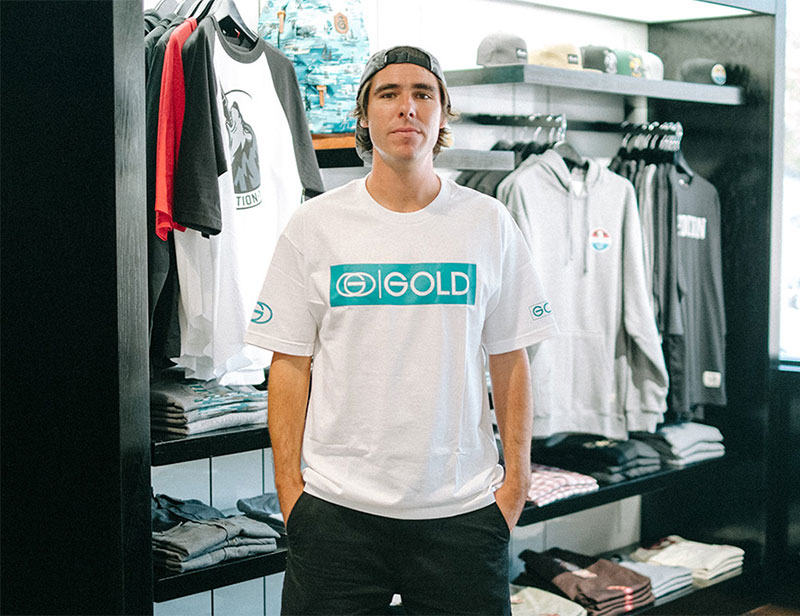 48 Blocks: You’re also on the LRG skate team, how did you first hook up with them?

Kelly: Well, when I first got on Expedition I was riding for Elwood clothing. That was cool, but it wasn’t really what I wanted. I always loved LRG since the first time I saw their clothing. I had a couple friends that were older than me that I would skate with a lot that worked at LRG too. They really never said anything about riding for them. Then a little later on, I hadn’t heard from anyone over at Elwood for a long time. I had no clue what was going on with them. One day, I remember Rob G and my friend that used to work over at LRG called me up asking if I wanted to ride for them. I was so hyped! I love LRG. The vibe over there is so sick. Everyone is always having fun, but working hard as hell at the same time.

48 Blocks: What projects are you working on right now?

Kelly: I just got back from China with LRG. We skated everyday, filming and everything. We got some good footage out there and had a great time. It felt like a great start to a video! Who knows whats gonna happen—still nothing written in stone yet.

48 Blocks: I remember a year or so ago, you had a gnarly ankle / foot injury. How did that go down and how long did it take to heal?

Kelly: Yeah this part of my life was pretty damn shitty. I seriously didn’t get to skate for about a year and a half. I would always try and skate, but my foot would be in excruciating pain. I ended up having to get two surgeries for it. Getting back into skating was super hard. When you’re off your board for a year and a half almost, your balance is way off. For a while, I was pretty sketched on skating gaps because that’s how I broke it in the first place. For the most part, it’s all good now.

48 Blocks: What do you do when you’re not skating?

Kelly: When I’m not skating, I like to just chill with friends, play some poker, or maybe go out to a bar or something. I’m also down in San Diego a lot because my girlfriend lives down in Pacific Beach. So I’ll chill down there a bunch too.

48 Blocks: How’s it been having Rob Welsh and Joey Pepper on the team?

Kelly: Being on the same team with those two is so sick. I mean I hardly ever get to see them because they live so damn far away, but its always a good time when we do get to hang out and skate. They definitely get me psyched. 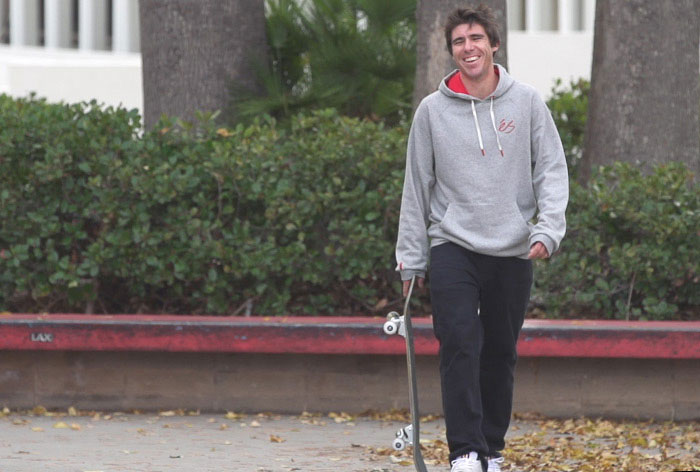 48 Blocks: What other sponsors do you ride for besides Expedition and LRG?

Kelly: I ride for Gold Wheels, Venture trucks, Laguna Surf and Sport, and I get shoes from éS .

48 Blocks: Is there a Kelly Hart pro model in the works for anytime in the near future?

Kelly: Wow, I think I gotta get some more coverage before any talk of that goes down.

48 Blocks: How often do you go on the internet, what sites do you hit up when you’re online?

Kelly: I pretty much wake up everyday and go straight to my laptop and go on the internet. I usually just go on Myspace, Youtube, and the Kayo and LRG site. I also usually go on Skateboarding.com and TheSkateboardMag.com too, Crailtap and 48 Blocks a bunch too.

48 Blocks: If you could change one thing about the state of skateboarding right now, what would it be and why?

Kelly: Well, skating out here in California pisses me off a lot. We always seem to get kicked out of spots no matter where we go. Even when it’s somewhere no one even cares about. Kind of insane that we have to travel all the way out to China or Barcelona to go skate amazing spots. But hey, I’m definitely not complaining about that! It’s crazy that its come to that though. I pretty much just wish that cops and security guards would mellow the fuck out on skateboarders. I think the worst are the soccer moms and the hero dads that try to butt in and make you stop skating—that is definitely the worst.

48 Blocks: What’s the last trick that you learned and what inspired you to try it?

Kelly: The last trick I’ve learned is probably nollie bigspin flips. That trick just feels really rad to ride away from. I don’t know why I started doing it. It’s just really fun to do.