48 Blocks: What were you doing before you worked at World?

Marc: Before I did stuff for World, I was doing artwork for this freestyle bike company that was owned by R.L. Osborn. It was called Bully Bikes. I was really into trick bike riding back then. R.L. was a top pro BMX freestyle rider in the 80s. He had a big house in Hermosa Beach and Rocco and Rodney Mullen were living there at the time. Before too long, I got a call from Steve about doing graphics for his new company, SMA World Industries. Another strange connection back then was that R.L.’s dad started the first BMX magazine, BMX Action, which later spawned the freestyle BMX magazine, Freestylin’. That’s where I first met Andy Jenkins—who was working as the editor of Freestylin’. And Spike Jonze, who was their photographer, way before they both went on later to start Girl.

48 Blocks: Describe the environment at World back in those early days. What was it like dealing with the chaos and how did you adjust to that?

Marc: I think I had a role in creating that chaos. So I don’t think there was anything to adjust to. It was definitely not business as usual. Part of Rocco’s business model was that he tried to only hire female workers in the very beginning—I was freelance. Even the warehouse was staffed by girls that were skaters.

48 Blocks: The art that came out of World was a big departure from what was going on graphically at the time and really stood out. How much creative influence did you have on the image? Were these mostly Rocco’s ideas or were you coming up with your own?

Marc: A lot of the earliest ones, like the Rocco Winnie the Pooh, were Steve’s ideas. But from there, a lot of the graphics were ideas I kind of came up with on my own or fleshed out from some general direction from Steve. One of the greatest things about working with Rocco was how he played the role of an enabler. Like if you had an idea he would always encourage you to follow through on it no matter how reckless or crazy it was.

48 Blocks: How important was shock value in producing a graphic back then? Was it more that you were just working and coming up with ideas, or did you feel the need to outdo previous messages and take things completely over the top?

Marc: Yeah, for the first couple of years there was a lot of importance placed on coming out with things that were really thought through and executed in the best possible way—no matter how long it took to complete the process. Also, there were never ever any deadlines we had to meet with the graphics. If a graphic wasn’t ready by the time a product catalog was released, we would just put a picture of a blank board in its place and write “graphic coming soon.” Shock value was definitely a consistent theme. But whenever we came out with something that was supposedly shocking, it was mainly for the humor—not because we were trying to do shit that was outrageous purely for the sake of it. 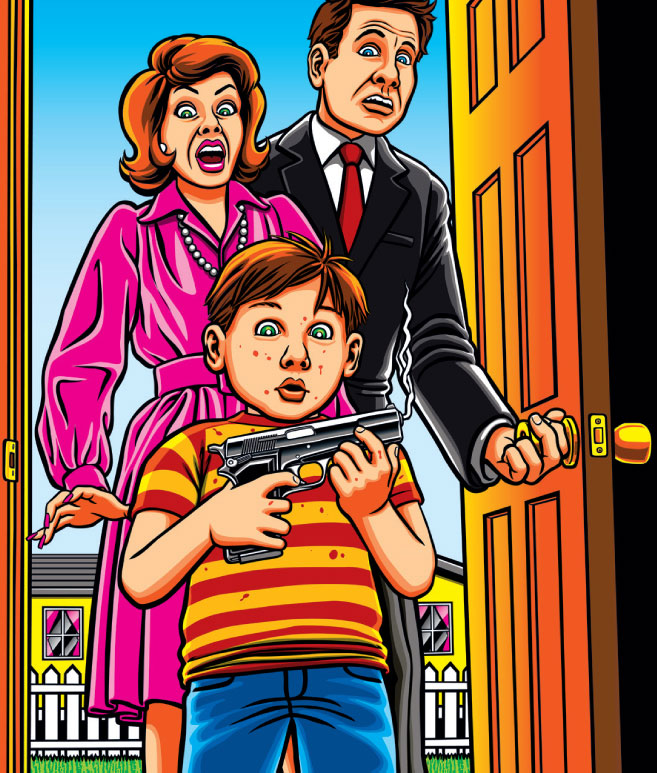 48 Blocks: Were there ever any graphic ideas that you weren’t comfortable working on and thought, “I can’t do this.”

Marc: I think the only graphic that I ever felt uncomfortable working on was the original cover art for the World Industries video Love Child. The name of the video is based on the title of the song by Diana Ross about a mixed race child whose parents are black and white. So for the cover art, Steve suggested having a black man and a white woman holding a baby zebra. The zebra made it to the final cover art. But for some reason I didn’t want to include the human parents—a decision that’s really kind of odd considering some of the other graphics that I’ve done.

Marc: Back then, it seemed like all the riders had a really care-free and defiant attitude that probably came at least in part from how fucking good they were at skating. I think that—along with the fact that they were creating all kinds of new tricks and doing shit that hadn’t been done before—may have somehow indirectly contributed to the graphics. It was like everyone had something new to offer. And you didn’t care whether or not it was accepted. Maybe you got off on it even more if it wasn’t accepted.

48 Blocks: I’ve heard you would work really long hours into the night. What sort of work schedule were you keeping back then and how long on average would it take to produce a graphic?

Marc: Yeah, we worked pretty retarded hours. I would usually roll in around 11:00 or 12:00, and then stay until around 11:00 or 12:00. A lot of the graphics would take about two to three weeks each. This was definitely the case when the slick-bottom decks were introduced. With that kind of printing, you could have photographs or paintings as graphics. Before the introduction of slick bottoms, all decks were silk-screened—which in its own way is also a very tedious process since it involves first creating a piece of full-color art, and then separating the artwork into individual colors that could be printed one by one. But when the slick bottom boards came along, Rocco saw that as a chance to have full-on oil and air-brush paintings for graphics. This was before computers were used. I hadn’t done much painting before. So there was a steep learning curve. I did the Accidental Gun Death in colored pencil since I was afraid to paint. I would work from home on those. Maybe coming in a few times a week to get a free lunch off the Roach Coach. That’s what we called the catering truck that came every day of the week that Steve paid for to let everyone at World have a free lunch.

48 Blocks: Do you have a favorite graphic?

Marc: I guess my favorite would be the Natas Satan board. I like how we were able to apply graphics on the board upside-down, with the nose pointing downwards. Now that kind of thing wouldn’t really register since boards are all more or less symmetrical. But back in the early ‘90s, the nose and tail of boards still looked different. Plus the board has full frontal nudity, a decapitated baby, a pentagram, 666, and priests hanging from a cross. I really have to thank Natas for taking the graphic. It was originally designed for Jason Lee, but when Natas adopted it he made it even better since the whole story of his name being coincidentally (and unintentionally) Satan spelled backwards kind of makes the board have more meaning.

48 Blocks: The Fucked Up Blind Kids series is one of everyone’s all-time favorites. How did that come about?

Marc: In the mid 1980s, there was this series of trading cards called the Garbage Pail Kids that was really popular. The cards featured characters that had names like Adam Bomb and Juiced Josh. Their names each reflected something about their personality. For example Adam Bomb had his finger on the button and his head was exploding in a mushroom cloud. The characters were a parody making fun of these annoyingly cute kids’ dolls that had been a huge fad just a few years earlier called The Cabbage Patch Kids. I think the idea for each of the Blind boards was basically my attempt to come up with a nickname like the names for the characters in the Garbage Pail Kids trading cards, but with even more fucked up identities. The names really had no basis in reality—except for maybe Jerkin’ Jordan. The team might have already been calling him that before the boards came out. The Fucked Up name though I definitely have to attribute to Rocco. I remember I was showing him the graphics and struggling to come up with a name for the series. I think I may have said something like, “I can’t think of anything to call them. They’re so fucked up.” And then he said something to the effect of, “Why don’t we just call them that then—The Fucked Up Blind Kids.” 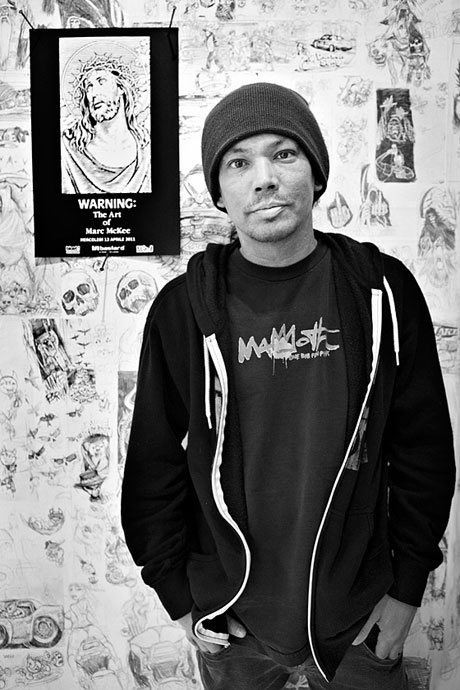 48 Blocks: What’s one memory from back in those early days that stands out to you?

Marc: Sitting in Disneyland jail with Jeff Tremaine, Danny Way, and Lance Conklin. How we got there was the result of a feature article in Big Brother where we interviewed Slayer at Disneyland. Actually the interview took place when Dave Carnie and Rick Kosick rode in with the band in their limo and met us at the Disneyland Hotel bar. Anyway, somehow it ended with Lance Conklin jumping off of the second story monorail platform into the lagoon at the Submarine Ride. I got the jump on video. Lance spent the night in Anaheim jail. We each were interrogated by the head of Disneyland security. But Jeff’s story was definitely the best. He told the head of security that Lance was standing on the monorail platform minding his own business when suddenly a small Filipino kid with a rattail jumped up from behind and karate kicked him to head sending him over the railing into the Submarine Ride 16 feet below.

48 Blocks: What’s the craziest thing that you have witnessed at World?

Marc: Maybe when Dave Carnie and Chris Pontius showed up at the World office before we all left for the Big Brother East Coast Tour road trip article. They were both completely naked and covered with orange body paint. Actually Chris wasn’t completely naked. He was wearing cowboy boots.

48 Blocks: Do you think it would be possible to do now what World was able to do back then and still become successful in the mainstream?

Marc: I don’t know. Someone should give it a try. But they would have to really do a lot of outrageous things to even come close to what went on back then. And what was really kind of unbelievable is that it was all done with the full participation of the top skaters of the time.

48 Blocks: What are you doing these days?

48 Blocks: What is Rocco up to now? Has he completely stepped away or is still somehow involved with skateboarding?

Marc: Steve is no longer involved in skateboarding—at least not on the business side of things.