Sammy Baptista has that comfort on a board that comes from growing up skating since he was a little kid. He hit the limelight early, and has seen the highs and lows that go hand-in-hand with a pro skate career. After going skating in LA, all we can say is that Sammy Bap’s not done yet. The skills and style are looking better than ever. Check the interview below and be on the look out for the upcoming Turf video.

48 Blocks: How’d you hook up with Shorty’s? What was it like getting on a big time team when you were so young?
Sammy: I grew up in Santa Barbara skating the Powell Skate Zone, that park that was in Questionable and a lot of videos back then. It was an influential spot at the time. There were a lot of pros and a lot of things going on, I started getting stuff from Powell but the owner of Shorty’s was always super cool. We just had our little click that we had already started skating with. He already had Shorty’s hardware going, he was like “Yo, don’t even fuck with Powell anymore; it’s about to be a wrap – we’re about to do boards.” I didn’t really know what was gonna happen, but they were already the biggest bolt company, so I figured it was probably gonna bubble. Then I remember one day Tony was like, “We’re gonna fly Chad Muska up there to skate with you.” That’s when I thought, “this could be something.”
48 Blocks: You got flow from Powell, but was Shorty’s was your first official sponsor?

Sammy: Yeah, they were my first real sponsor. Well my homie Billy Backer used to own this company called 500 Nations, he was the first one to really look out for me and be like, “don’t worry, I got you.” He had my back and Tony had my back; but Shorty’s was the first one to really put me on.
48 Blocks: What was it like touring with Muska, Smolik, and all those dudes back in the day?
Sammy: It was crazy man! Chad would always have bad luck, I swear! The first three or four days of the trip he would be going so crazy that he would end up hurting his ankle or something would happen. He would try to stick it out but would just get over it and go home. It was always the illest to have Chad there. We went to Japan and it was dope! Smolik was the funnest, we would just wild-out. That guy is the most generous dude ever. It was like whatever he had you had and he was definitely doing his thing at the time.
48 Blocks: Was Fufill The Dream your first video part?
Sammy: I was actually in this Powell video, Scenic Drive. I had a couple tricks, I lived in Colorado at the time. Fufill The Dream was my first major part where I went and decided the music and everything.
48 Blocks: How old were you back then?
Sammy: I was like thirteen or fourteen.
48 Blocks: So what happened with Shorty’s and when? There wasn’t too much talk about you being let go…
Sammy: It was kinda like slowly but surely everyone just started going different ways. It wasn’t anyone in particular, but you get to that point where people aren’t gonna be happy with Snicker bars anymore. People have bigger aspirations. Heads get big and people don’t see eye-to-eye. It’s really a bad thing that happens in a lot of different companies, but that’s what it is. At the end of the day the people running the show up there… I’m not gonna name any names and I know it was hard for them to do cause they didn’t have any say; but they were just ghost ridin’ the whip. How are you gonna control things when you’re not even seeing anything going on. That’s pretty much what happened. It sucked, I loved that company – I thought that was the company that I was gonna retire on. At the end of the day, shit happens and people change. Much love to everyone involved, that was such an amazing situation. “Nothing lasts forever” are the truest words.
48 Blocks: How long ago did all of that go down?
Sammy: That was probably like a year ago.
48 Blocks: Where are you living these days and what have you been up to? 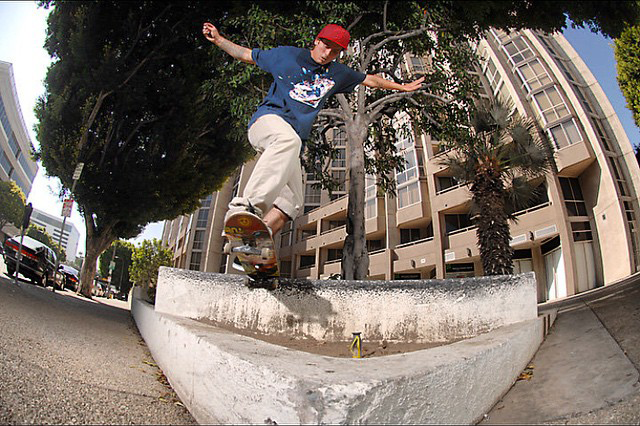 Sammy: I’ve been staying with my brother, he just bought a house in Santa Barbara. He’s been looking out a lot, it’s nice to have family. I’ve been doing it for a long time on my own, since I was a kid. Now it’s dope cause they’ve been looking out, I appreciate all my family so much. I’ve been skating a grip, Santa Barbara on the weekdays and LA on the weekends. I’ve just been trying to stay on the grind. It was hard for a minute, like last summer. When you go through the drama at the end of the day you think, “what am I really doing this for?” I liked it when I was a kid, just to go outside and do a kickflip; now there’s all this pressure involved. The one thing I noticed is that if you keep on riding your board and keep on doing what you do, it’ll guide you in the right direction.
48 Blocks: You recently had an ill sequence in Transworld, obviously you’ve been skating a bunch. Have you been filming a lot?
Sammy: Yeah, I’ve been filming a lot and trying to shoot photos and stuff. I think the new generation is so much more on the magazines, I grew up watching videos. York, Gino, and all those fools – that’s who I looked up to. Magazines were cool, but that was just the icing on the cake. I find myself leaning more towards the video, but you can’t neglect the photos, people need to see that too.
48 Blocks: Talk about Turf, your pro model just came out. How’d that come together?

Sammy: Man, Me and Mike… it was so random. If you would have asked me five years ago where I’d be right now, I probably would have said that I’d still be on Shorty’s. Things don’t work out, weird things happen… me and York ended up becoming free agents around the same time. We were always cool and the stars just aligned together right or something. Now we’re here and it’s dope… Wussler, Wakazawa, everyone. It’s dope!
48 Blocks: So the video is dropping soon, I imagine that you’ve got quite a bit of footage since your last part.
York: He has the last part. Sammy has the last part in the video, CURTINS FOOL!
Sammy: I’m hyped, you know what I mean. This is the one that I’ve been waiting for – not just me, I can’t wait to see everyone’s part. Their ain’t no “I” in team. I’m just glad to be a part of something. It don’t matter how much dope footage you got, if you’re on the dolo it don’t mean nothing. I’m just glad to be a part of a team where I can go and get something and have it go towards something good and be with people I’m down with and support something that I can actually be psyched on and go to sleep at night happy with myself.
48 Blocks: Any other sponsors or projects that you want to mention?
Sammy: Yeah, Ambiguous clothing – they’re always looking out, John over there. Jimmy over at DC, he just became the team manager, he’s looking out now. Marcel at Venture, the homies at Spitfire. Anyone and everyone that’s ever given me anything or gave me a chance.
48 Blocks: Any last words you want to say to wrap this up?
Sammy: Thanks God, family, York, every little kid that rides a skateboard and learns a kickflip for the first time. That’s what it’s about. Turf’s up!